To truly capture the essence of George Smiths vision, The Glenlivet Founders Reserve has been created using the time-honoured distillation methods that he int 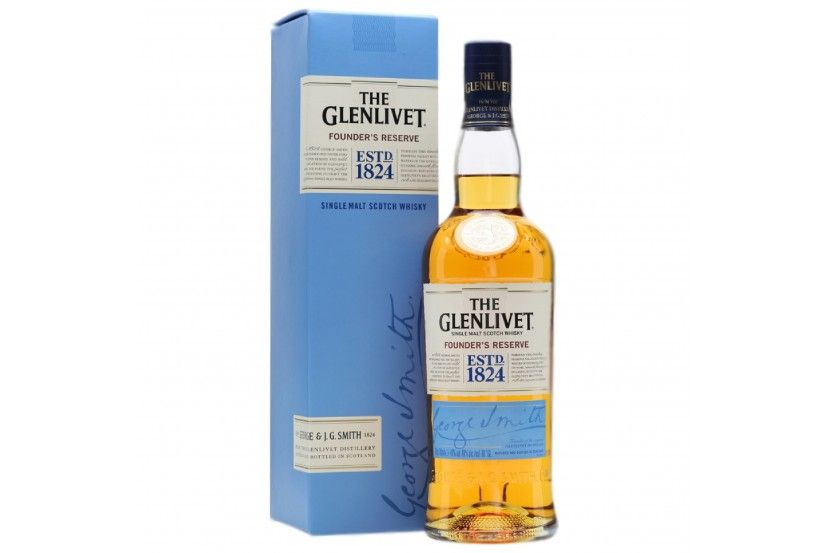 Nose: Some dates then what at first appears to be a touch of salinity, but is better described as a slightly sharp plum and apricot wine note. There's orange zest, toffee, hints of struck match and chocolate raisins, but before this starts to sound 'Sherried' there's also pear drops, a dusting of sweet cinnamon, honeysuckle and sweet pea. Palate: Fruity, then sweet, more toffee, a touch of anise, then into milk chocolate Flakes, banoffee pie and apple turnovers. Finish: Creamy toffee to the fore now, a little oak and sweet barley sugar warmth too. Milk chocolate raisins linger. Overall: Perhaps a little sweet, but it would work well with ice where the sweetness would be slightly suppressed - and before you shudder with disgust, Alan Winchester said that he liked his with a little ice sometimes too.

1822 - The Beginning - The remote and isolated Livet valley made it ideal for illicit distillation. This is where our founder George Smith learned his craft. Hidden away from the Customs Officers and soldiers amongst the hills and abundant springs, George had time to distil slowly making a whisky that would soon become world renowned. In August 1822, King George IV arrived in Scotland for a state visit and asked to try a drop of the infamous Glenlivet whisky. An illegal dram it was, but even that didn't stop the King. 1824 - The Smuggler of Smugglers - Two years later and after a change in legislation, George saw his window of opportunity and rode to Elgin to get his licence to become the first legal distiller in the parish of Glenlivet. This didn't go down well with the illicit distillers around him and he was told he would burn along with his distillery. In a bid to protect himself from these sinister smugglers, he carried a pair of flintlock pistols with him at all times, making it clear he wasn't afraid to use them. His courage set the foundation for our whisky today. 1839 - The Whisky Business - By the late '30's, The Glenlivet distillery was producing more than 200 gallons a week. This expansion meant our founder would soon need more employees. A few years later, Andrew Ushers & Sons of Edinburgh joined as sales agents, helping spread the word of the whisky. 1852- The Rare Old Glenlivet - Our reputation spread beyond the green hills of Scotland to the smoky skies of London. When Charles Dickens wrote to his friend urging him to try the "rare old Glenlivet", he was recommending a single malt that went beyond his great expectations. Dickens had discovered THE whisky. 1871 - The Story Continues - With the passing of George Smith on November 27, the job of continuing his life's work fell to his youngest son, John Gordon Smith. He had been away training for a career in law but on the death of his father, he returned to pick up the reins of the business. 1884 - The Three-Letter Word - With other competitors desperate to take the name 'Glenlivet' for themselves to capitalise of our notoriety, John found the solution in a small but powerful three-letter word. He fought hard for the rights to that word and in 1884 we became the one and only THE Glenlivet. 1921 - The Captain - When John's second great-nephew Captain Bill Smith Grant took over the distillery in 1921, he was met by two challenges: The Great Depression and Prohibition in the USA. However, as a decorated war hero from World War One, Captain Bill rose to meet these challenges head on. Even though production dropped during these tough years, the distillery emerged in a great position in the US market after the repeal of Prohibition. 1933 - The Train pulls in - As Prohibition came to an end, Americans came forward, thirstier than ever for fine Single Malts. Thanks to Captain Bill's perseverance through the depression, we were in the perfect place to serve them a dram. One of our first major customers was the Pullman Train Company, who began serving miniature bottles on their routes, helping to spread our fine whisky across the continent. 1950 - The Most Popular Whisky - Thanks to trains, planes, and automobiles, the middle of the century saw The Glenlivet account for half of the Scottish malt whisky sold in the US. Thanks to new jet-setters of the 50's, word soon spread to all corners of the world: this, is THE Whisky. 2010 - The New Century - The second turn of the century saw another vast expansion of our distillery, this time by our current Master Distiller, Alan Winchester. Having spent 40 years honing his craft, Alan is just the man to ensure the spirit of our founder lives on. 2015 - Innovator - Almost 200 years since our distillery doors opened, we crafted something new to celebrate: The Glenlivet Founders Reserve. Created by Master Distiller Alan Winchester, this fine liquid captures the distinct, smooth, fruity taste that George Smith first envisioned in 1824, and went on to be the most successful Single Malt innovation to date (IWSR, 2016). Today - The Glenlivet - To this day, The Glenlivet remains the benchmark that all other Speyside single malts are measured against. It's the definitive whisky that brings us together. And it must be said, we take great pride in setting that standard. To quote Captain Bill Smith Grant, "If we can't make good whisky, then we shouldn't make any whisky". We'll raise a glass to that.

To truly capture the essence of George Smiths vision, The Glenlivet Founders Reserve has been created using the time-honoured distillation methods that he introduced so long ago. Made with water from the same crystal-clear mountain streams, in the same cold, pure air, The Glenlivet Founders Reserve is as smooth and fruity as the whisky that first ran from the original copper pot stills. These unique, lantern-shaped copper stills, designed by the man himself, are not the only important tools in our distilling legacy. The traditional oak casks in which we mature the whisky give each expression its own distinct characteristics. When George Smith began distilling, The Glenlivet had no age statements and he selected whisky from casks of a range of ages. We have replicated this freedom with The Glenlivet Founders Reserve, selecting whisky from a variety of traditional aged oak casks. Then, to lend a modern twist to the flavour of the expression, Master Distiller Alan Winchester marries together a selection of the aged oak casks and American first-fill oak casks. American first-fill oak casks are those that have never before been used to mature whisky. Selective use of these casks provides a smooth, creamy sweetness that mingles harmoniously with the delicate flavours and complex fruity tones already present in the whisky.