When Tomatin Distillery was established in 1897, the isolated and idyllic setting of Tomatin was almost perfect. However there wasn't a local workforce; the loc 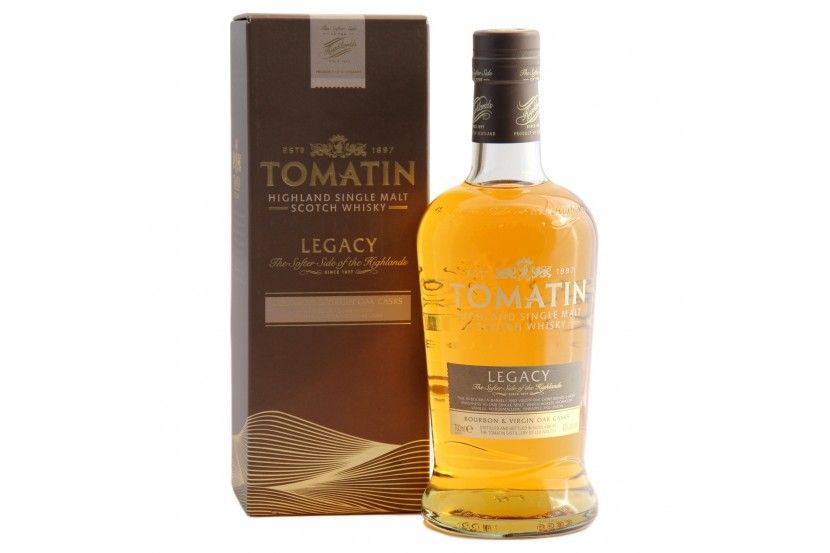 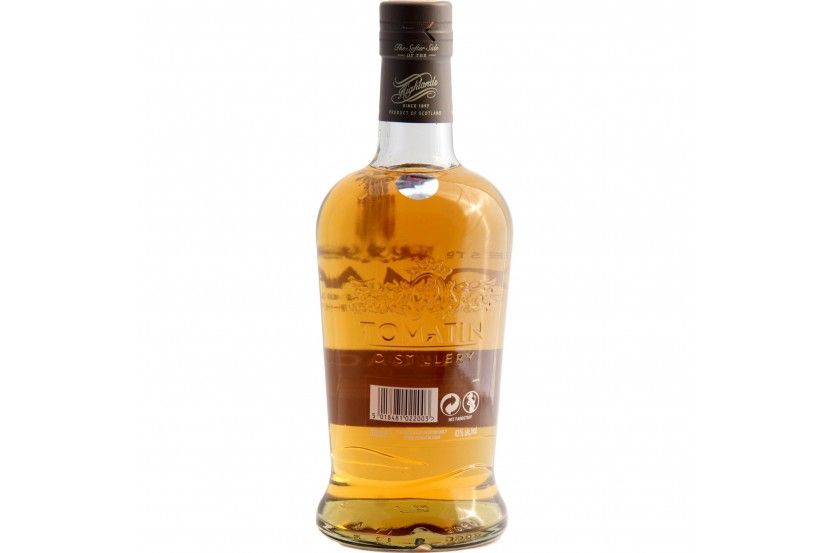 Time in Bourbon barrels and Virgin Oak casks brings a light sweetness to The Tomatin Legacy, which boasts aromas of vanilla, marshmallow, pineapple and lemon. On the palate gentle flavours of candy, pine, lemon sherbet, apples and sponge cake emerge ahead of a light, clean finish.

The origins of whisky production in Tomatin are hard to be precise about - the formal distillery which operates today was established in 1897 but there is reason to believe that whisky production, albeit illegal, has been an important part of life in the area around Tomatin since the 1700s. The name itself gives an insight into this secret past: "Tomatin" translates to "Hill of the Juniper Bush", as juniper wood gives off no smoke while burning it has long been a favourite of illicit distillers who must keep their practice secret. Today, a building known locally as "The Old Laird's House" still remains on the site of the current distillery and it is believed that this is the spot where the cattle drovers taking their livestock from the north of Scotland to the central markets would stop and fill their flasks from an illicit still. However, it was only in 1897 at the peak of the Victorian Whisk Boom that three men, John MacDougall, John MacLeish and Alexander Allan, along with a handful of investors, decided to open a formal distillery on the site and form The Tomatin Spey District Distillery Ltd. The chosen location may have been inspired by the history of illicit distillation on the site, however, despite being very isolated (Tomatin is over 1000 feet above sea level on the eastern edge of the Monadhliath Mountains), it was also a very practical location; next to a newly opened rail line, not far from a market- it lies just over 18 miles south of Inverness - and on the Alt na Frith (meaning 'free burn') which provided a perfect source for soft, Highland water. The isolated location was perfect in almost every way, the only thing it couldn't offer was a workforce. So when construction at the distillery begun, the architect was instructed to build a number of houses to accommodate distillery workers. Over the years the number of houses onsite began to grow as did the distillery itself and there are now 30 houses on site which Tomatin continues to offer to its employees. At this time in 1897, demand for 'Scotch' seemed to be unquenchable with more distilleries (eleven) being built in this year than any other while total production had been increasing significantly for some time. In 1956 the original two stills, which were capable of producing 120, 000 proof gallons, were joined by another pair. Only 2 years later another two stills were added. Once full capacity was realised it was again time to increase potential output and 1961 saw the total still count reaching 5 pairs with another single still joining them in 1964. 1974 saw the most significant boost to capacity with the total number of stills reaching 23 (12 wash and 11 spirit) requiring seven spirit safes and with the capacity to produce around 12 million litres of alcohol every year. At this time Tomatin was the largest distillery in Scotland. During this period Tomatin was considered amongst the most important producers in the market place and one of the few distillers to offer their make as a single malt - initially a 5yo then also at 10yo. The vast majority of the whisky made at Tomatin was sold in bulk to third party companies and was used in many famous blended whiskies such as J&B, Chivas Regal and Johnnie Walker. The success and size of Tomatin was, however, also its demise with the bust of the 1980s - retail sales of blended whisky decreased, and so did demand for Tomatin, forcing the company into liquidation for a second time. In the 20 years prior to going into liquidation the growing export of Scotch Whisky meant that Tomatin's biggest customer was Japan's largest drinks producer - Takara Shuzo Ltd. As Tomatin was forced into liquidation in 1984, Takara Shuzo joined forces with the respected trading company Okura and purchased the distillery, forming the Tomatin Distillery Company Ltd and thus creating the first fully Japanese owned Scottish distillery in 1986. Since that time, the focus has changed and the distillery has gone from strength to strength. There has been a change in strategy to grow the Tomatin brand in its own right. The range of single malts is currently sold in over 50 export markets, with additional markets being added all the time. We have gone from the biggest, to the best.

When Tomatin Distillery was established in 1897, the isolated and idyllic setting of Tomatin was almost perfect. However there wasn't a local workforce; the local inhabitants were scattered shepherds and cattle drovers. The company began a project of construction to accommodate its workforce. Since that time the distillery has been at the heart of the community and the community at the heart of the distillery. This legacy has continued and Tomatin remains one of the few distilleries to provide a home for its dedicated craftsmen.