Aliança XO 40 years was distilled in 1963 by charentais method (2 distilleries) and aged for more than 40 years in French, American and Portuguese oak barrels. 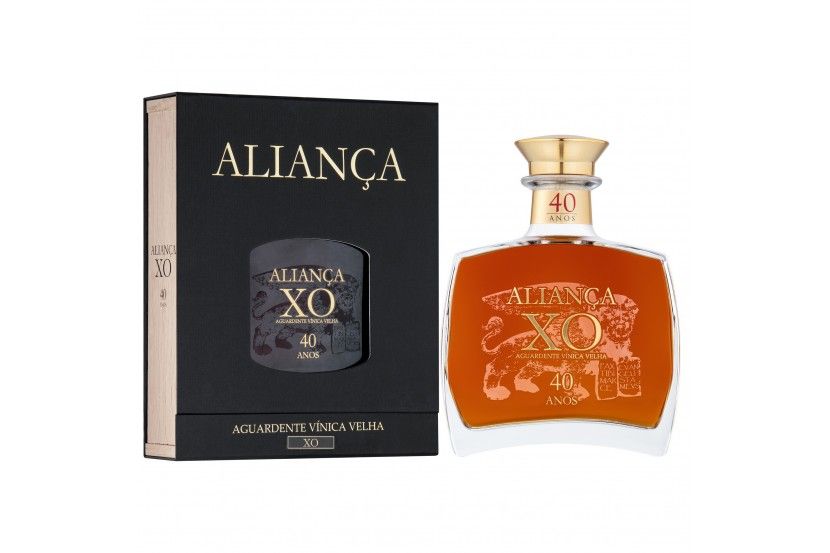 Aliança XO 40 years is an extremely elegant, full-bodied spirit of structure and complexity. While it is of reasonably high alcohol content, it is also well balanced, with full fruit and high acidity. Bright amber appearance. A wide spectrum of flavors develop on the palate, where fresh and candied fruit notes (apricot, citrus fruit) intermingle with touches of honey, chocolate, almond and hazelnut. Subtle hints of oak and vanilla emerge in the lingering aromatic finish.

Aliança XO 40 years is at its best as a after dinner beverage, to be enjoyed in a snifter, to be fondled and cuddled and sniffed upon after finishing a sumptuous repast. It can be wonderful with cheeses or desserts, and is perfect by itself. Serving Temperature: 20ºC

Aliança was founded in 1927, over 80 years ago, by 11 associates led by Domingos Silva and Ângelo Neves, in Sangalhos (Anadias county), Bairrada region.

The company started its activity by exporting to Brasil, África and Europe, representing, nowadays more than 50% of Alianças clientele.

Aliança is proud of their quality wine, sparkling wine and brandy not only available in Portugal but in the 60 countries they export to.

Represented in the main wine regions of the country, Aliança's main goal is to achieve the highest quality possible. The company has several estates and around 600ha of land in regions including Alentejo, Douro, Dão, Bairradas and Beiras, exploring around 600 ha of winery.

The investment in production areas, with the acquisition of the estates and the modernization of the cellars allowed for the increased level of vinification. It also allowed for the purchase of high quality oak barrels, to be used in the wine aging.

Aliança has grown and has been developing a modern strategy on several levels, from product to distribution, as well as wine tourism.

In 2007, Commander José Berardo acquired Alianças major capital, and made it part of Grupo Bacalhôa.

Recently Aliança made large investments in wine tourism by remodeling the facilities in Sangalhos. Aliança has an excellent tour circuit that shows the passion and patience that goes into making sparkling wine. Guests can visit the different stages of fermentation in the tunnels, breathe in the smell of oak near the impressive amount of barrels, and end the tour with a stop by the traditional brandy cellars.

Aliança wines includes Quinta dos Quatro Ventos, Quinta da Garrida, Quinta da Terrugem and Quinta das Baceladas. Aliança has won several awards, nationally and internationally, and in 2005 Wine Spectator listed them as one of the 20 best wine companies in the sector worldwide, being the only winery in Iberian Peninsula to be included.

Aliança XO 40 years was distilled in 1963 by charentais method (2 distilleries) and aged for morethan 40 years in French, American and Portuguese oak barrels.Eaux-de-vie ageing, conducted under the watchful eye of our winemaking team, requires a greatdeal of patience and attention to detail. The same applies to the conditions in which these eauxde-viesare aged, enabling complex tertiary aromas to develop over the years.Aliança XO 40 years enjoys a special ageing process in cellars where the initially high moisture levelis gradually decreased, a technique which has an impact on the mature aguardentes style androundness.